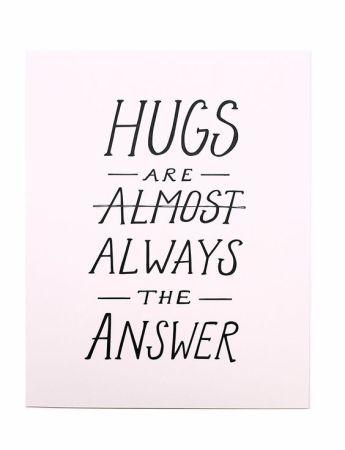 This morning started out a little rough. I felt lost and an inescapable anxiety was increasingly gnawing away at my stomach.  I put on some classical music (after trying some Nelly and Fleetwood Mac to no avail), and then tried to do a few star jumps and figure out what the hell I was feeling. As I stared into my teacup, searching for some answers – as if there were actually tea leaves in there that could have given me a mystical epiphany –  (there were not… I am not sophisticated enough to use tea leaves or  own a proper tea strainer!)…It hit me. I was feeling really lonely.  LONELY DAMMIT.

Loneliness makes me feel uncomfortable. It makes me feel a bit pathetic even, and usually I avoid feeling lonely at all costs. Usually on a Friday morning, in a bid to avoid loneliness, I will frantically be sending messages to friends so that my weekend is entirely mapped out. I am a massive planner and my friends always tease me for my need to plan a million things in advance. And perhaps this is the reason why. Perhaps I was always a little bit terrified of the silence and in an attempt to avoid it, I made damn sure it would never be able to creep in. At one point the thought of being truly alone actually terrified me, but here I sit on a Friday night, tapping away at my keyboard, not another beating heart in site, and I am surviving it. In fact, I am choosing it and I think I am even thriving. Why? Because for the first time in my damn life I am not avoiding the really scary thing. And thinking about the thing, whatever that thing might be, is always scarier than the thing itself. As humans we possess these marvellous and creative minds, but bloody hell, don’t we just utilise them to create the biggest load of B.S and unnecessary fear?

Good old Einstein once said that the definition of insanity was “doing the same thing over and over again and expecting different results” so, rather than avoiding the loneliness yet again, or finding distractions in the form of Netflix or vino or the coolest club till 3 am ( Read “cool” for me as Deco Dance *insert unimpressed groans from all my friends*!)  I have decided to sit with the loneliness and actually feel it. Amazingly, I am still here. Surviving all the loneliness and shit, and actually feeling pretty strong.

Now, I’m not talking perpetual, all consuming loneliness. I am not a total recluse, although admittedly Netflix and puppy snuggles have made that a very real possibility in my near future. My newfound habit of eating all my feelings is also worrying and means I will probably end up alone, lying in my bed and eating all the pizza, while being eaten by those Alsatians…. (But I’ll never let them get my pizza, NEVER! I will eat that pizza before they eat me)… But that is a tale for another day.

I have some pretty freaking spectacular friends and family around, and am in no way completely alone in the physical sense, but in my heart, I am just feeling a bit lonely of late. I think that is normal after any relationship ends and you are finding your feet again. A void that was once filled with hugs, and sweet messages, and just a little bit of chaos, is now empty, and for the first time in a long time, you have to face the reality of that void alone.

The void signifies both loss, and of course, newfound possibility. Here you have this brilliant chance to actually confront all your demons, throw out the stuff that no longer works for you, and deal with all your shit,  and then fill it will beautiful things…. things that you seem to find were within you all along.

But sometimes that hole feels really big, really empty, and really scary. In these moments the prospect of a hug feels like it might just save the day.  As I sat staring into my tea cup, I realised that I really, really needed a hug. With my whole heart I knew it, and as my eyes welled up a little, it became almost desperate.

An all-consuming, never-ending, bone-crushing, grizzly bear hug. A hug that lasts for hours and a hug that doesn’t give up. A hug worthy of flying to England just so I can curl up on my Mum’s bed and demand a big snuggle and a back tickle. A loving touch is so healing and comforting and I truly believe physical affection and warmth can honestly transform lives. Today when I picked Zahra up from school I gave her a massive hug. We then spent the afternoon watching a movie and she demanded back and arm tickles. I initially moaned and groaned, because I knew I would never get  an arm tickle in return, but just feeling that human touch felt healing. To feel close to someone you care for is a truly beautiful thing. I often feel this kind of affection from my little sister. We’ll be lying there, watching a film and she will play with my hair and curl up right next to me and say “I love you.” My whole heart literally lights up and it honestly gives me enough love and strength to get through the next week. Imagine if we, as people and friends, could give those we love and those we encounter this kind of love and connection. I’m not suggesting we run up to random strangers and hug them for dear life, and I am not saying we should hug people if we feel uncomfortable in doing so, but if there is someone out there who means the world to you, or is having a rough day, or looks a little down, why not give them a hug? When did you last give someone you really care about a massive, all-consuming, I’ll-never-let-you-go-coz-you-rock-my-fucking-world, HUG?

Human touch is vital for life, and without physical touch, we can literally go insane and lose the inability to cope with stress and function in healthy ways. Perhaps the most historic evidence of this is the horror of Romania’s orphanages in the 1960’s, when Nicolae  Ceaușescu came into power. In an attempt to build an industrial working force he institutionalised the system of “leagăne”, which translates to “cradles”.  He severely restricted contraceptive methods, banned abortion and taxed women who had less than four children. The number eventually rose to five children and childless men were also taxed. Unable to cope with these numbers of children, thousands of children were sent to live in institutions by their families and “from birth to the age of three, grew up neglected in understaffed institutions, often experiencing severe sensory deprivation in their formative months.” (Konnikova, 2015)

The horror of this system was only exposed to people outside of Romania in the 1990’s, when neurobiologist Mary Carlson visited the country, with her psychiatrist husband Felton Earls. Earls had been a student of a psychologist by the name of Harry Harlow, who had examined the detrimental impact of social isolation on chimpanzees and monkeys. When meeting with the orphans, he recognized a similar response in them because of a lack of physical touch, noting a familiarity in “the muteness, blank facial expressions, social withdrawal, and bizarre stereotypic movements of these infants.” (Konnikova, 2015) A lack of ‘tactile stimulation’ was also directly linked to elevated levels of the stress hormone coritsol. A lack of physical touch literally leads to greater stress in our bodies. Stress can compromise our immune systems, hinder us from functioning in ways that enable us to cope, and impact both our quality of life, and also its duration.

Touch, and warmth and hugs and affection are essential for life and yet, we are never taught this growing up.  Physical affection and warmth have been gendered as ‘feminine’, and in consequence, so many boys are denied this vital kind of affection. In fact, so many people are. I want to cry when I think of all the old people who have been neglected and left to die alone in homes, or those who are braving difficult lives alone, or animals who are neglected and unloved and never get to experience the joys of a cuddle.

I kind of want to start a hugging revolution! We will wear sparkly outfits and carry placards around that house cheesy slogans like “More Hugging, Less Snubbing” or “Give Me a Cuddle, When you Feel Like a Puddle”, or “Before You Hit the Club, Give me a Hug.”

Okay, slogans are evidently not my thing. My slogans suck, but I do give a pretty mean hug and I just want to bring back hugs, because they freaking rock and I think they are pretty damn cool.

So, the point of this weird rant, which is both advocating alone time, and the need for more cuddles, is just to love each other and ourselves a bit more. I think it’s important to embrace the loneliness and realise that you are able to survive it, and even thrive despite it.  But, I think it is also massively important to tell the people in your life that you are feeling lonely, and that more than anything you would really like a hug. And when someone you love is angry, or mean, or hurting, maybe try giving them a hug too. It is hurt people after all, who often “hurt people” and maybe in dropping our own ego’s and choosing to see their light, even when they cannot see it themselves, we offer them the greatest gift.

“That’s what people do who love you. They put their arms around you and love you when you’re not so lovable.”

So friends, when did you last enjoy a Life-changing snuggle of epic proportions? You can’t help but feel all fuzzy inside after a hug. That feeling is literally magic!